Jacqueline Alastra is a partner in the Orlando office practicing in the areas of first party property loss and property coverage matters. Defending insurance carriers for over a decade, Ms. Alastra has extensive experience regarding all aspects of first party property disputes from inception to resolution. Ms. Alastra has represented carriers for claims related to windstorm, hail, water intrusion, sinkhole, fire, theft, pests, collapse, and mold. She also has experience providing coverage opinions and defending third party liability claims. Before pursuing her career as an attorney, Ms. Alastra worked for a contractor specializing in repairs and restoration associated with insurance claims. Ms. Alastra is licensed to practice in Florida’s state courts, as well as the United States District Courts for the Middle and Southern Districts of Florida. She is also a Florida Supreme Court Certified Circuit Court Mediator. Ms. Alastra is certified by the Florida Department of Insurance as an instructor for continuing education courses. She has been recognized five times as a Florida Rising Star in Super Lawyers Magazine since 2013. In addition, Ms. Alastra is fluent in Spanish and Italian. 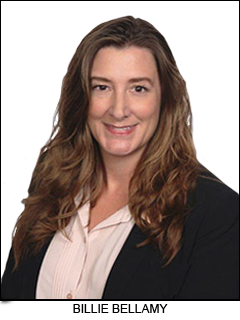 Ms. Bellamy is a partner practicing primarily on first party property and insurance coverage matters. She spent the first ten years of her career with a prominent Orlando insurance defense firm, representing insurance carriers and insureds in first and third-party claims in the areas of homeowners insurance law, with a focus on sinkhole and property damage litigation, as well as auto negligence, premises liability, rental car law, and appellate law. Ms. Bellamy spent the last two years with a prominent Orlando Plaintiff’s firm representing hospitals and physicians in the area of Personal Injury Protection law. She is licensed to practice in all state courts of Florida as well as the United States District Court for the Middle and Northern Districts of Florida. 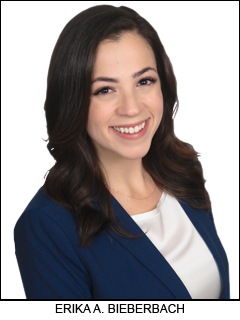 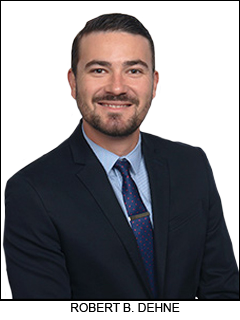 Robert “Bobby” Dehne is a partner managing the firm’s Orlando office, and focuses his practice primarily on first party property and insurance coverage matters. He has extensive experience in handling all types of property damage claims, both pre-suit and litigation, and has actively participated in a large number of SIU/fraud investigations.

Mr. Dehne is rated AV by the Martindale Hubbell professional rating organization upon review by his peers; the highest rating conferred on practicing attorneys by the Martindale Hubbell organization. Further, Mr. Dehne has been selected to the 2017, 2018, and 2019 Florida Super Lawyer Rising Star list, an honor reserved for those lawyers who exhibit excellence in practice, to which only 2.5% of attorneys in Florida receive this distinction..

Prior to his legal career, Mr. Dehne received his Bachelor’s degree from the University of Central Florida, and his Juris Doctor from the Florida Coastal School of Law located in Jacksonville, Florida. He is licensed to practice in all state courts of Florida, as well as the U.S. District Court for the Middle District of Florida 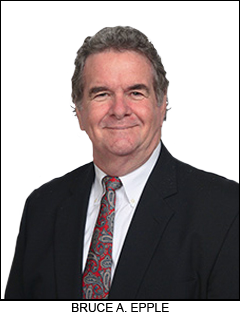 Bruce A. Epple is a partner in the firm’s Orlando office handling first party property and insurance coverage matters. He has a long history of civil litigation and trial experience handling third party and first party insurance claims, both pre-suit and litigation, in almost every venue in Florida and he has personally participated as first chair attorney in over 20 civil jury trials through verdict during his lengthy legal career.

Before joining the firm, Mr. Epple served 12 years as Senior In-House Staff Counsel for The Hartford Insurance Group. His prior insurance defense experience also includes representation of a wide variety of insurance carriers. He has served in the past as a Certified Circuit Court Mediator and for four years operated his own Mediation practice.

Bruce is an avid supporter of the UCF Knights (“Charge On!”) and enjoys attending live sporting events throughout the state whenever his schedule permits. 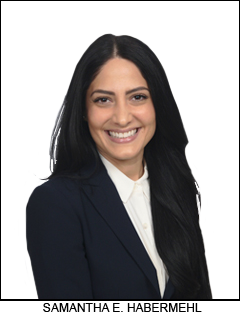 Samantha E. Habermehl is an associate attorney in our Maitland office focusing on First Party Property Insurance Defense and Litigation. Prior to joining Groelle and Salmon, Ms. Habermehl practiced Criminal Law as an Assistant Public Defender for the Ninth Judicial Circuit where she was a zealous advocate for her clients. During her three years as an APD, she litigated a variety of complex criminal law matters. Ms. Habermehl earned her Juris Doctorate from Barry University School of Law where she was recognized for her academics in Criminal Law and Bankruptcy. 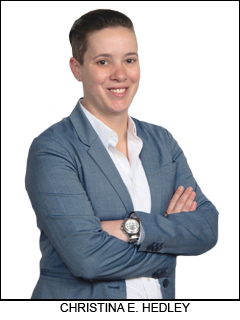 Christina E. Hedley is an associate practicing primarily on first party property and insurance coverage matters. Prior to coming to Groelle and Salmon, she practiced criminal law as an Assistant Public Defender in the Ninth Judicial Circuit for six years. As an Assistant Public Defender, she litigated a variety of complex criminal law matters and completed more than forty jury trials and eleven bench trials relating to juvenile offenses. Through her work as an Assistant Public Defender, she regularly engaged in the discovery process, legal research, motion practice, depositions, negotiations, and trials. Moreover, her practice required her to consult with, and take depositions of, various witnesses, including expert witnesses specializing in such fields as firearms, pharmacology, toxicology, fingerprints, eye witness identification, and psychology.
Ms. Hedley graduated from Barry University School of Law where she was awarded a certificate in Trial Advocacy with honors. Ms. Hedley earned two Bachelors of Science from the University of New Haven for Legal Studies and Criminal Justice. She is licensed to practice law in all state courts in Florida. 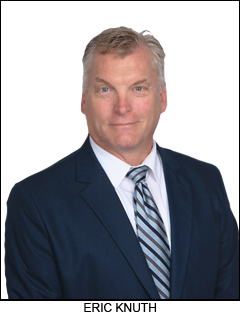 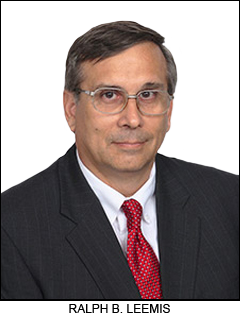 Ralph B. Leemis is a Florida native from Jacksonville, Florida. He considers himself a “second generation insurance defense lawyer” following in the footsteps of his father, Lloyd C. Leemis, a former FBI Special Agent under J. Edgar Hoover and a founding member of Boyd, Jenerette & Leemis, now Boyd & Jenerette, P.A. He grew up with the mindset of an insurance defense lawyer, attending depositions and trials as a child, and participating in his first surveillance of a fraudulent worker’s compensation claimant at the age of 8. He graduated from Samuel W. Wolfson High School in Jacksonville, Florida in 1972 as his graduating class valedictorian.

He then attended the University of Florida law school, graduating in 1979. While attending law school, he was one of a small group of founding law students for the University of Florida’s Student Legal Services (under Leonard J. Grill, Esquire), with the founding student group becoming notable lawyers and jurists throughout the State including Circuit Judge David A. Giant (deceased) and Fifth District Court of Appeal Judge Jay P. Cohen.

After graduating from law school, Ralph began his litigation career at Peacock and Johnson, P.A. in Orlando, where his first case was a residential sinkhole loss in Seminole County, Florida. His second case was assisting in the defense of a property owner in the eminent domain proceedings for the Epcot interchange on Interstate 4.

From 1980 until 1988, Ralph handled a wide variety of matters in general practice and litigation, and including selected bodily injury and property damage cases.

Since 1988, Ralph has focused his practice primarily on insurance defense law handling first-party and third party cases, for bodily injury and property damage claims and litigation. That has included defense of insureds and coverage matters (for insurers), including analysis and defense of fraudulent cases and bad faith claims. His training has included acquiring Supreme Court of Florida Mediation Certifications for County, Circuit and Appellate Mediations.

University of Florida – B.S. in Psychology 1976

Mr. Marante joined Groelle & Salmon, P.A., as an associate in the firm’s Miami office in 2017. Prior to becoming an attorney, Mr. Marante obtained valuable experience in the areas of personal injury litigation and property and contract disputes. He graduated with a Bachelor of Arts from the University of Florida, and received his Juris Doctor from Barry University School of Law. Mr. Marante now practices in the area of first-party insurance defense, with a focus on residential property claims investigation and litigation. Mr. Marante is fluent in Spanish. 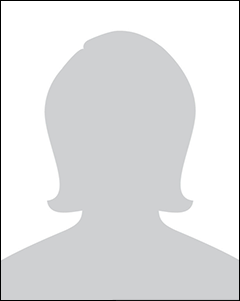 Gina Glasgow is a partner in the firm’s Orlando office. She has extensive experience in handling first-party property, third-party liability and insurance coverage matters. She handles all types of commercial and residential pre-suit and post-suit property insurance claims, including hurricane, wind, hail, water, plumbing, theft, fire, business personal property and business interruption. In addition, she has been involved in numerous SIU/fraud investigations and has provided representation to policyholders in several types of third-party liability actions.

Ms. Glasgow is a member of the Florida Property Insurance Fraud Task Force and is a certified Florida instructor of insurance adjuster continuing education. She has presented at the Florida Advisory Committee on Arson Prevention (FACAP) and Florida Insurance Fraud Education Committee (FIFEC) seminars as well as at several private insurance seminars.